Barack Obama is a hero.  History may have to assert this conclusively, for our courageous president is already coming under fire for having Bin Laden taken out.  What should we have done with the man who masterminded this: 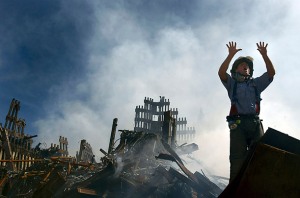 I have watched Obama closely since the election.  I’ve seen him make strong, measured decisions, control whatever reaction he might have to the nearly unbelievable abuse leveraged upon him by the GOP.  I’ve seen him comfort the bereaved, and today I’ve enjoyed looking at his face as he watched Operation Geronimo go down.

So much could have gone wrong.  Now there are rhetoric’s ashes falling through the sky— the self-righteous indignation of the Paki’s who were effectively hiding Bin Laden.  The twin Pillsbury doughboys Limbaugh and Beck bitching that we should have taken him alive for the intel.  What?  Do you really think Bin Laden would have given up two words?

Here’s a sane-sounding HuffPo comment on this aspect of things:

“While I agree with Michael Moore’s interpreta­tion of what this country stands for, I will agree with others on thread here that the shooter on Seal Team 6 was within every right to disperse of Bin Laden if he even so much as twitched a muscle. Given the danger this man represente­d, the Seals could not assume there was no imminent threat from booby trap of explosives or some other danger that Bin Laden could have triggered with a simple movement. At that moment, it was either immediatel­y surrender or get killed. I guess Bin Laden chose death, because they say he was given one chance to surrender, and he did not. Do I believe that he was given the chance? Yes. Do I believe that he moved and was then taken out? Yes. Do I believe it was justified? Yes, because he is a terrorist on the battle field. This is not the local police finding a drug dealer. This is in the middle of a war, where the Taliban or al Qaeda have yet to surrender. We could take the Nazi’s to court, because they surrendere­d and were subsequent­ly arrested. It’s a bit more difficult to take Bin Laden to court when there is no surrender.”

Moreover, weighing in yet again, I have to say that I absolutely cannot understand why people are critical or questioning whether or not water-boarding led to this action.  Does anyone really care whether Jihadists are water-boarded or not?  All of these Monday morning quarterbacks, generating tempests in teapots. The Native Americans, bitching about the code word “Geronimo.”  You self-anointed victims.  Why not take pride in the fact that the name Geronimo was considered appropriate to the level of the mission? And guess what– this wasn’t George Bush’s victory just because he collected a little data before we returned him to Texas.

I wish I had Barack Obama’s ability to rise above the bullshit. I certainly wish I knew how, when my buttons are pushed, not to react, and I suspect many of us would like more of that ability. It’s not in my genes,  the business of withholding reaction  when bullied/rejected/criticized/shamed/abandoned— the Big 5 things people should not do to each other at all costs.

In a somewhat related matter, today I found a cache of little posts on a site by women who were abused by their mothers.  I’ve talked quite a bit about my mother’s illnesses but not so much about what she did to me.  Suffice it to say that I was on high alert, perpetually recovering from maternal rejection and verbal abuse, for eighteen years. In my world, maternal rejection is its own kind of personal terrorism.

Here is what one woman has to say, in part:  “I was raised by an alcoholic mother whose behavior and moods were so erratic that I lived in almost constant tension and fear of her and for her. . When she was around, she was usually too drunk, stressed out, angry or depressed to really even notice what was going on with her children. I feel like I basically grew up without parents at all, and had to try to learn to fend for myself at an early age. When I was a teenager, I lived under the illusion that once I got away from her and on my own, I would be okay and happy. But, like I’m sure you know, just getting away from her didn’t heal all the damage to my spirit. I too felt this great loneliness and void where a mother’s (and fathers) love should have been. It’s hard for a child knowing they are not really loved or wanted by their parents. From that abuse and neglect, I learned to abuse and neglect myself. Having not learned about love and care and discipline, I did not know how to give those things to myself…”

Good stuff, learning that one is not alone, that one’s own bewildering behavior, when triggered,  has an origin.

Accordingly I find stories of courage inspiring and helpful and cathartic and I suspect many others do as well.  Events in which people are decisive and empowered and heroic affect me.  Watching the simulation of the raid on the Abbotabad compound just now, I was proud all over again of our Navy Seals.  If you are a hand-wringing liberal who thinks we should have handled this in some other way, you may comment, but don’t expect agreement from me.  This piece of scum was the closest thing in my generation to Satan incarnate– a conscience-less Master of Terror who planned and rejoiced in taking out 3,000 U.S. citizens in the most vile imaginable way. Think of the emotional fall-out, the infinite cases of PTSD arising in New York after 9/11.

Living with PTSD, forever on a state of high alert, your emotional skin flayed off so that you flame up without much provocation, is its own kind of hell.  If something happens to detonate your sense of the world being a safe place, that you are safe in it, you never fully recover.  Your brain has etched new survival responses to danger, your limbic response system goes haywire,  and the triggers are omnipresent.  You are in permanent survival mode; you  can’t trust, or relax, or even sleep.  If anything like the original woundings or betrayals goes down, you are ready to either run, go for the jugular, or both.  If you were abused by a dominating perpetrator and anything remotely feels like domination, you extend your claws.

In any event,  I concur that there is absolutely no way the Pakistanis could not have known OBL was there (see below)  and Obama made the right decision in not taking the compound out with a drone or two.  Clearly by all accounts despite some variation in details, even an unarmed OBL wasn’t going to surrender.  Capture/Kill was the right decision . See below.  And  Bravo once more to the Man of the Hour– Barack Obama.

Salman Rushdie, writing in the Daily Beast this week:

“This time the facts speak too loudly to be hushed up. Osama bin Laden, the world’s most wanted man, was found living at the end of a dirt road 800 yards from the Abbottabad military academy, Pakistan’s equivalent of West Point or Sandhurst, in a military cantonment where soldiers are on every street corner, just about 80 miles from the Pakistani capital Islamabad. This extremely large house had neither a telephone nor an Internet connection. And in spite of this we are supposed to believe that Pakistan didn’t know he was there, and that the Pakistani intelligence, and/or military, and/or civilian authorities did nothing to facilitate his presence in Abbottabad, while he ran al Qaeda, with couriers coming and going, for five years?”

Dead courier vermin via Reuters, one of whom may be OBL junior, below.