(Blogger’s Note June 10– tried to upload video and at the end of video come others evidently eternally attached to the link: too much life.  Disregard, or Watch at your own risk….sorry.)
Con te partiro
Veduto e vissuto Con te
Non piu non pas esistono…“

Life is rich and full and the Earth blossoms and then there is a blemish, a blight, a day like yesterday.

WR Apris, the Hope Diamond of Arabian mares, got sick Tuesday morning, and wasn’t going to pull out of it.  As she was 28, I didn’t have any difficulty determining that we should let her go sooner rather than later.

I called her Aprisa.  She was foaled on the Wapiti Ranch outside Steamboat Springs, Colorado, in 1982. Wapiti Ranch was a big deal in its day and one of this mare’s half sisters was purchased after a Scottsdale show for half a million dollars.

Her sire was a stallion named GG Samir, a gorgeous thing imported from Spain in the 70’s that ended up as the lynchpin of Wayne Newton’s breeding program on his Aramus Ranch outside Las Vegas.

See a great account of Newton’s work as an Arabian horse magnate here.

I traded a Golden Retriever puppy for Aprisa three years ago, after losing a mare and foal to an induction of labor gone awry.  When I looked over her papers I was stunned, and I built a whole file on the magnificent horses in her immediate family.

On our first fateful ride the saddle slipped as I was dismounting and I fractured my leg.

After I made my decision, I touched her and stroked her face for the first time since my accident, and it was to say good-bye.

If I had to give myself a grade for how I handled the day, it would be a C-.  I am proud of taking swift action on her behalf and being the one to decide that she should not malinger so that we could avoid our grief.

I’m not so proud of how I dealt with it all; I said harsh things, when everyone was doing their best.

Now we are left with the beautiful and tonight lonely Amira Minjad JL aka Bronte, her pasture mate, our 17 yr old Arabian,  who is pacing the fence in the rain.  I posted on CL for a buddy, but that could take some time.

I hate good-byes.  I hate the absence where something was, something alive, that lent meaning and beauty to life. 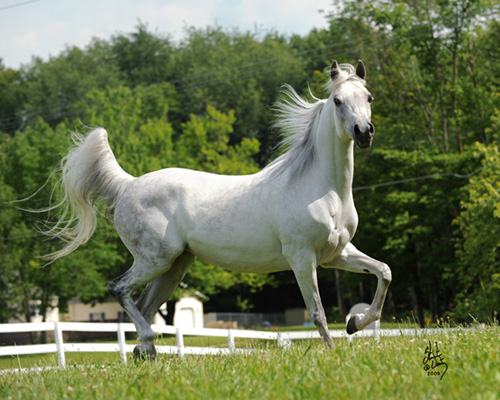 Some of Aprisa lives on, through the beautiful GG Samir,  and Laila’s colt, below:

But where animals are concerned I’m at 0 tolerance for suffering.  I cannot stand to see any animal malinger.  I am not one to bankroll the local vet school with last ditch surgeries and rounds of chemo.

We– I– and my companion, have spent two decades loving and nurturing animals on our place.  We are tired.  Anyone who has lived this life understands.  You reach the point where you stop replacing what you have lost.

You let go of a dream and a way of life that sustained you.

You  make the hard decision that your own aching back and need for less stress are more important than being on duty to the beings around you.

It helped me to distract myself with weaning our kittens, and “loving on” Gilded Peak Scrumptious Munchkin, my young Golden Retriever.

Munch turns one next month and she is drop-dead gorgeous, her sire a son of my old girl Tess by a Scandinavian import, and her dam, an import to the Double B Ranch in Kersey all the way from Romania.

One day Munch will come to live with me in the wake of yet another adios.

But here is some relief for the heart– found this on You Tube and was struck by mare and owner working together, sometimes the best case scenario.   I love the owner’s tenderness and bond with the mare and you can hear her greet the foal.  Truly wonderful.   See disclaimer about the other videos at top of post!

Underneath the green and gold, the lushness and fervor, the spending skies and the waxing and waning moon, there is that equivocal season, that equation: when we love, we are fated to lose.  The two go hand in hand. 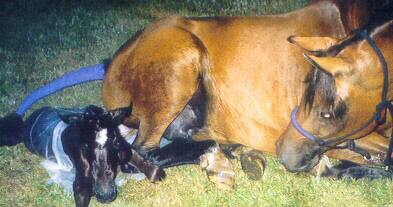 As a newborn foal Aprisa would have looked like this, dark, as she turned grey.

Requiescat in pacem, Aprisa, beloved of the world.