What a voluptuous, erogenous and fruitful spring.

The sky swells with rain every day and the alfalfa fields are thriving.  It’s the week of the lilacs, the crab apple blossoms,–

Flowers common and unfamiliar, the silver poplars over the kennel leafing so that now there is a canopy over Munchkin the young Golden and Scherzo and Mandy, the Jack Russells in their daytime spot.

Doug saw a young fox leap up on the doghouse and walk across the wire tops of the runs.  I saw a fox making herself at home in one of the empty kennels.  Seeing a fox is an epiphany somehow– some glimpse of flame-red wildness, an intimation.

As followers of my blog know I have been driving out each day to visit the paint mares that belong to an old man on a road I have traveled for over forty years.  Two weeks ago a liver chestnut and white mare foaled a gorgeous filly with a white blaze and four white stockings.  I thought the huge black and white mare I call Saga would be next, and I worried about her when we had a freeze, and a storm and tornado warnings.

Then, a taupe and white mare I didn’t think was even pregnant produced an exquisite, tiny filly, so tiny I thought it was one of the coyotes that follow the mares. 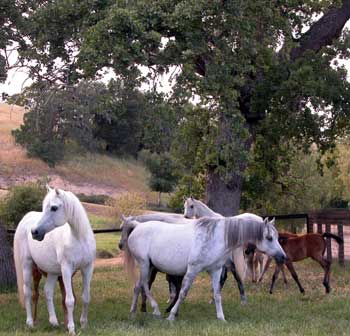 The most momentous event, though, was that day before yesterday, the stallion, the daddy horse I call Dazzle, was turned out with the mares.  He had been wintered down the way with the yearlings.  This is a very personable stallion despite how much he loves being herd boss and making baby horses.  He comes up to the fence for treats, nodding his head.  Once I saw someone holding a baby lift the baby up to pet the stallion and I was terrified. Stallions strike and one strike would have knocked this mother and baby into the traffic, even with the fence between them.

I watched Dazzle for a long time day before yesterday, herding the mares with his head down and his neck stretched, bringing them back under his command.  I watched one of the most pregnant mares turn and face him down, pinning her ears.  She’s about to pop and she was having none of his macho antics.

I figured that just having him around would trigger somebody’s foaling and sure enough, finally, night before last, Saga foaled– a beautiful grey and white colt.  So there are three foals now, and perhaps two more today if those huge bellies nearly touching the grass are an indication. 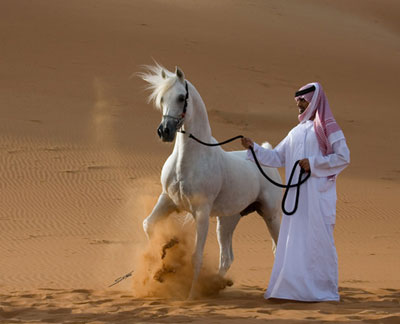 Prince of Dubai with the great stallion Escape...

Then, I went out to the place and we had a cat event.  Two springs ago I rescued a kitten I called Snafu, who a year later, had a litter– that would be last year;  two females from that litter became our house cats and then developed teen pregnancies.  We know that in an ideal world we would have spayed cats, but it’s all we can do to keep everyone fed and vaccinated.

The darkest of these two, Marmalade,  had three kittens three weeks ago that I’ve begun to wean with a pudding of tuna, canned milk, cheese and chicken broth. I named the small female Juliet, and the toms Primo and Lorenzo.

Listening to opera and singing along last night, I played with the kittens and then our beautiful pale cat Nilla, sister to Marmalade, hugely pregnant and overdue, began to cozy up to the kittens, and both cats and all three kittens bundled themselves up against Tess, my matriarch Golden Retriever.

All of this fascinated me.  Across several hours  I watched Nilla slide into labor, purring and purring.  I put her in her own box next to Marmalade and her kittens, putting Juliet in with her and this worked for awhile until she, Nilla,  climbed in with everyone, leaving Juliet alone and then Juliet hurled herself back into the other box.

I took Nilla back out into the living room and we sat and watched her while she lay next to us and  had contractions.  She had the first kitten, an extremely tiny thing that I dried off with an old t-shirt.  Then, we put her in one of the bathrooms and she grabbed the kitten, got out of the box,  and went into a corner.  We put down newspaper and toweling and by then it was midnight.

Ultimately, she had six kittens the size of mice, who seem to be locking on, and she is in seventh heaven. There is nothing more maternal and forbearing than a mother cat and possibly few people as tired as we are at the moment.

All of this may not be of interest to anyone but me, but you see, my whole life used to be about raising and nurturing animals.  I had pens full of Golden Retriever puppies, a mare in foal, goats that kidded and lotsa goats’ milk I fed back to the puppies.  I rescued lambs and kids at the livestock auction and generally went overboard, filling up our six acres with life that begat more life and more life. I wrote on the fly, putting drafts on discs or in a drawer and became a midwife and a surrogate mother.  This accounts for my premature aging and my need to live most of the time, since my accident, alone with one dog.  It’s quite lonely at times but my animal family and companion are only a few miles away.

In the past few years, cancer has taken out all but two of the Goldens. Foxes do carry off cats and kittens; ergo Snafu is no more.  This fall we put our old mare down and now my beautiful April, my twenty-eight year old Arabian, may be having her last spring.   Age is claiming us so that the house is sagging and coming apart and no one has any energy to deal with it all.

Doug accepts this.  He accepts that he is getting old.  I do not.  I fight against it.    I don’t recognize this tired old woman in the mirror who is writing a memoir about being young and in love in a gorgeous place far away and decided to keep the story going in a novella because it is about being alive, saying yes to life.

How enriched life is by foals, kittens, dogs, animals that look into your eyes and adore you and have simple needs– Tess, Scherzo, Mandy, Munchkin, April, Bronte, Chow Mane the tomcat, Marmalade, Nilla, Juliette, Primo and Lorenzo and…….  I think about us, and how tired we are today all because we cared about our cats, when we could be off doing something important and significant– what that might be escapes me at the moment.

8 thoughts on “Primavera with a Vengeance…”